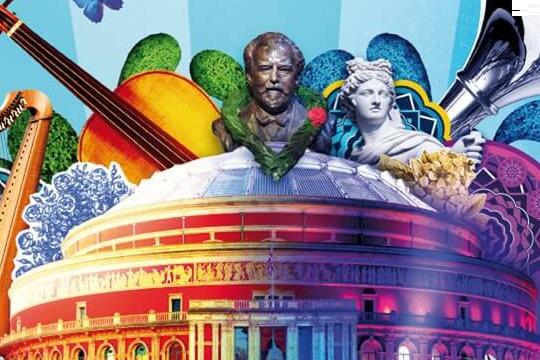 The complete programme listings for the 120th season of the BBC Proms were announced on April 24, and this year’s festival features a whole host of works by Music Sales composers both old and new. Running from July 18 to September 13, the Proms features new commissions and world premieres by some of Music Sales’ leading composers.

The Proms season kicks off on the first night, July 18, with The Kingdom by Edward Elgar, performed by the BBC Symphony Orchestra alongside the BBC Symphony Chorus and BBC National Chorus of Wales conducted by one of this year’s “birthday batonists” Sir Andrew Davis, celebrating his 70th birthday in 2014.

On July 23, Gnosis by John Tavener will be given its world premiere by mezzo-soprano Sarah Connolly with the BBC Symphony Orchestra under the baton of Jiří Bělohlávek. Another new work by Tavener,Requiem Fragments, will be premiered on August 4 at the Royal Albert Hall by the Tallis Scholars and the Heath Quartet with conductor Peter Phillips. They also perform Tavener’s Ikon of Light. The music of John Tavener also appears in the Last Night of the Proms on September 13. The BBC Singers perform his Song for Athene in tribute to the composer who passed away at the end of 2013.

An exciting new work for flute and orchestra by British composer Simon Holt was commissioned by the BBC for performance at this year’s Proms. Morpheus Wakes will be premiered by internationally renowned flautist Emmanuel Pahud alongside the BBC National Orchestra of Wales and conductor Thierry Fischer on July 27. The flute here represents Morpheus, the god of dreaming ‘as if slowly waking from a deep, troubled sleep’.

Judith Weir has also been commissioned by the BBC to write a work for this year’s Proms series for young pianist Benjamin Grosvenor. Day Break Shadows Flee will be given its first performance as part of the Proms Chamber Music series at Cadogan Hall on September 1.

2014 marks the 80th birthday of the most recent Master of the Queen’s Music, Peter Maxwell Davies. The BBC Proms are celebrating this milestone with several concerts dedicated to his music. On August 12, the BBC National Orchestra of Wales and Thomas Søndergård perform a 22-minute Concert Suite from Act II of Caroline Mathilde. On August 14 the Royal College of Music hosts a Proms Plus Composer Portrait exploring some of Maxwell Davies’ chamber repertoire including Runes from a Holy Island. The London Sinfonietta perform a programme at Cadogan Hall on August 30 as part of the Proms Saturday Matinee series including Linguae Ignis (Tongues of Fire). On September 8, the composer’s birthday, the Scottish Chamber Orchestra under Ben Gurnon perform a late night Prom dedicated completely to his music, including Strathclyde Concerto No 4 for clarinet and orchestra.

In addition to the new works, numerous other works by Music Sales composers make an appearance during the season. On July 25, Moeran’s Violin Concerto will be performed by Tasmin Little with the BBC Philharmonic in a concert alongside Elgar’s Enigma Variations. The music of Witold Lutoslawski received a welcome revival in 2013 during his centenary year, and his Concerto for Orchestra (clip below) is being performed this year by the National Youth Orchestra of Great Britain under the baton of Edward Gardner on August 10. Symphony No 5 by the Danish great, Carl Nielsen will be performed on August 11 by the BBC National Orchestra of Wales under Thomas Søndergård. On August 18, the BBC Symphony Orchestra perform two works by Igor Stravinsky, his short concert opener Scherzo fantastique and the Violin Concerto in D with soloist Baiba Skride.

For the full listing of Music Sales works throughout this year’s Proms season please see the website calendar.

The complete programme of 2014 can be found on the BBC Proms website.