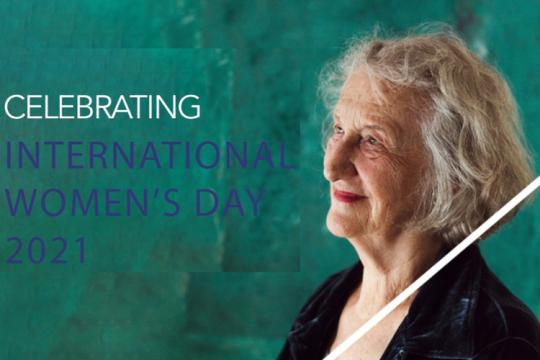 In celebration of International Women’s Day on Monday 8 and Women’s History Month all this March we are highlighting some of our composers recent and up-coming concerts and latest released recordings. We invite you to discover some of these bold and ground-breaking pieces within the Wise Music catalogues from some of the most sort after composers today.

Read our Celebrating Women Composers: A Timeline interactive brochure laid out by composer in chronological order and emphasises the rich history and output of their orchestral music in particular. We have included brief introductions to each composer, repertoire listings and links to explore the music further online.

The Orchestra of Gothenburg Opera have programmed a celebratory International Women’s Day concert on March 6 that includes the concerto for oboe and orchestra by Thea Musgrave inspired by the ancient Greek myth Helios and the anthem of the women’s suffrage movement The March of the Women by Ethel Smyth from 1911.

Kaija Saariaho
For decades, Kaija Saariaho has been one of the greats of her craft, and since the turn of the millennium, her work has found resonance worldwide. In 2022 she turns 70. View our new celebratory guide to her key works.

On March 31, the Finnish premiere of Notes on Light (chamber version) will be performed by Lapland Chamber Orchestra, cellist Anssi Karttunen and John Storgårds conducting.

A newly directed version of opera Only The Sound Remains makes its Japanese premiere on June 6 with Tokyo Bunka Kaikan Chamber Orchestra and Clément Mao-Takacs at Tokyo’s Bunka Kaikan.

Looking ahead to July 3, the long-awaited world premiere of five act opera Innocence with music by Saariaho will headline Festival International d'Art Lyrique d'Aix-en-Provence in France.


Anna Thorvaldsdottir
It is a busy start to 2021 for Anna Thorvaldsdottir, whose sound has made her “one of the most distinctive voices in contemporary music” (NPR) and the latest orchestral composition CATAMORPHOSIS by Icelandic composer premiered by the Berliner Philharmoniker on January 29 is no exception. The Iceland premiere by Iceland Symphony Orchestra and Bjarni Frímann Bjarnason follows on April 15.

Two prominent performances of METACOSMOS by Thorvaldsdottir will take place on March 18 with Iceland Symphony Orchestra and Daníel Bjarnason at Harpa Concert Hall, Reykjavik and then on April 15 with Oslo Philharmonic and Klaus Mäkelä in Oslo.

Then on May 14, WDR Symphony Orchestra and Cristian Măcelaru perform Dreaming by Thorvaldsdottir in Cologne’s Funkhaus. A piece described as ‘an imposing monolith that emerges from silence and recedes back into it, speaking of natural desolation, severe beauty and precarious tectonics in between’ (Gramophone).


Britta Byström
On March 12, the world premiere of Im Freien by Swedish composer Britta Byström will be streamed online from Karledy, Finland by Österbottens Kammarorkester and violinist Malin Broman.

Byström’s North American premiere of A Walk to Tchaikovsky will take place on April 14 in Montréal, performed by I Musici de Montréal and Jean-Marie Zeitouni.

Helen Grime
On March 14, 2021 the German Premiere of Helen Grime’s Piano Concerto will be performed by Ensemble Modern and Jonathan Stockhammer in Frankfurt. The Times’s Rebecca Franks remarked after the World Premiere ‘Grime has an ear for colour, a knack for telling contrasts. Harp and vibraphone darted around the piano, phosphorescent and otherworldly, while flute and clarinet, just visible through the stage door, called from afar....’

It will be spring soon by Helen Grime will be given its world premiere on June 18 from Växjö Concert Hall, Sweden. Commissioned and performed by Musica Vitae with soloists Ruby Hughes, soprano and Malin Broman, violin; the piece heralds the welcome Spring after Winter.

The following day, February 26, String Quartet No. 2, mvts II and III by Price was given a digital performance by Cleveland Orchestra which is available to watch now on YouTube.


Thea Musgrave
On March 21 the German Premiere of Night Windows for Oboe & Strings by Thea Musgrave is performed by Ivan Podyomov on oboe and Kammerakademie Potsdam with Trevor Pinnock directing from Friedenskirche, Potsdam. Night Windows takes its inspiration from a painting by Edward Hopper with the same title – of walking down a darkened street looking in through lighted windows and catching a glimpse of other people’s lives.


Gabriela Lena Frank
In 2017, Gabriela Lena Frank was included in the Washington Post's list of the 35 most significant women composers in history and on March 6, Louisville Orchestra and Teddy Abrams perform a live, online concert that includes her Leyendas: An Andean Walkabout (string orchestra).


Joan Tower
Also on March 6, Sixth Fanfare for the Uncommon Woman (for orchestra) by Joan Tower is presented virtually by National Symphony Orchestra and Akiko Fujimoto from the Kennedy Center, Washington as part of their declassified festival series.


Outi Tarkiainen
An online streamed Tarkiainen world premiere of her solo piano work Without a Trace by Paavali Jumppanen will be available to watch on April 11.