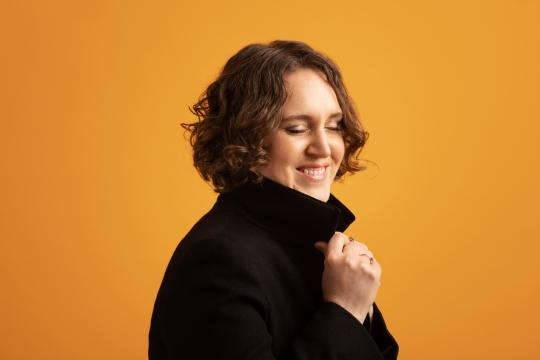 Whether writing on a large canvas or for more intimate settings, Helen Grime continues to win praise for the lyrical and distinctive quality of her music. A series of premieres, performances and residencies taking place over the coming months underline the versatility and imaginative breadth of this composer.

A pair of orchestral pieces inspired by the Scottish painter Joan Eardley will be premiered at this year’s BBC Proms. Eardley (1921-1963) is well-known for her paintings of Scotland’s north-east coast. The two pieces, which can be performed separately or together, will be heard for the first time over the course of a weekend of performances by Scottish ensembles, starting on August 5 when the BBC Scottish Symphony Orchestra conducted by Thomas Dausgaard will give the premiere of Catterline in Winter. Ilan Volkov will conduct the National Youth Orchestra of Scotland in the premiere of the second piece, Snow, which takes place on August 7.

Grime will be Composer in Residence at the Spannungen chamber music festival in Heimbach, Germany from June 20 to 26. The festival will see performances of her Aviary Sketches and Three Whistler Miniatures, as well as the world premiere of a newly-commissioned work, Five North Eastern Scenes, which will be performed by oboist Lucas Macias Navarro and pianist Huw Watkins. Like the recent orchestral pieces, Five North Eastern Scenes is also inspired by Joan Eardley’s paintings which, in the composer’s words 'capture the striking yet bleak beauty of North East Scotland'.

The Berlin Oboe Quartet will release the premiere recording of Grime’s Oboe Quartet on Costa Records on June 25. The disc also includes the Oboe Quartet by Richard Rodney Bennett.

The Composer in Residence at the Wigmore Hall in London for the 2016-2017 and 2017-2018 seasons is Helen Grime. The first event of her residency takes place on October 15, with two concerts exploring her music and the figures that have inspired her work.

Highlights include the UK premiere of Five North Eastern Scenes by Nicholas Daniel and Huw Watkins in the lunchtime concert and a performance of the Clarinet Concerto with soloist Mark van de Wiel and Birmingham Contemporary Music Group in the evening concert.

Grime’s music will be performed in the UK and Europe this season, including the Scottish premieres of Two Eardley Pictures by the BBC Scottish Symphony Orchestra in Glasgow and A Cold Spring by the Scottish Chamber Orchestra conducted by Robin Ticciati. Ticciati will also conduct the Deutsches Sinfonie-Orchester in the European premiere of Near Midnight in Berlin. Grime's 10 miniatures for solo piano will make an appearance at this year’s Leicester International Music Festival on Saturday 17 September, played by the Russian pianist Katya Apekisheva

The season also includes the premiere of her Violin Concerto, commissioned by the Swedish Radio Symphony Orchestra for violinist Malin Broman.