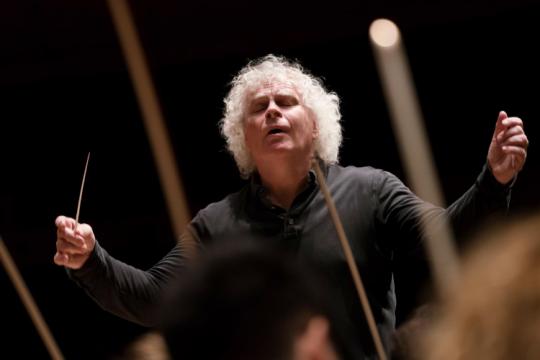 The 2017/18 season at the Barbican is set to be a rather special year. The headline item is the return of Sir Simon Rattle to the UK’s concert scene as Music Director of the London Symphony Orchestra in September, but we are also pleased to say that the season is packed with performances of works by Music Sales composers. We’ve highlighted some of the big events below.

Nimble melodic lines take unexpected turns, rustling around one another inside vast orchestral landscapes. Bright orchestral colours shine with clarity, like light rays across a clear winter’s sky. At once familiar and strange, this is the music of Helen Grime. - lso.co.uk

The first notes that Simon Rattle will conduct this coming season will be those of Helen Grime. A new LSO commissioned Fanfare by the Scottish composer opens the first concert on September 14. The orchestra then perform Grime again in the new year as Daniel Harding conducts her short orchestral work Virga. Virga, which takes inspiration from the beautiful natural spectacle whereby precipitation that falls from a cloud evaporates before it reaches the ground, can be heard at the Barbican Hall on Febraury 18, 2018. The LSO will also perform a brand new work by Grime to accompany their performance of Mahler’s Symphony No 9 under baton of Rattle, part one of a Mahler/Rattle double bill beginning April 19 next year, repeated again on Tuesday 24.

On November 30, 2017 Tan Dun conducts the LSO in a performance of suites from his scores for Crouching Tiger, Hidden Dragon (Ang Lee), Hero (Zhang Yimou) and The Banquet (Feng Xiaogang), accompanied by visuals from the films. Towards the end of the season, on May 17, Michael Tilson Thomas will conduct Sibelius’s Symphony No 6 and Symphony No 7.

To view the full details of the LSO 2017/18 season visit alwaysmoving.lso.co.uk

The 17/18 season begins with a ten-day series ‘This is Rattle’ with a fantastic selection of contemporary music. Helen Grime, Thomas Adès and Harrison Birtwistle each curate concerts for the event. Taking place on September 20, Grime’s programme for the Britten Sinfonia will consist of works by Knussen, Birtwhistle, and Britten (to name only a few), as well as a couple of scores of her own: Into the Faded Air and A Cold Spring. Judith Weir’s The Alps and Per Nørgård’s Hut Ab! will also feature as part of ‘This is Rattle’, performed by musicians from Guildhall School of Music and Drama on September 18. The Discovery Free Lunchtime Concert will take place at LSO St Luke’s, 12:30pm.

This December the BBC Symphony Orchestra turn their attention to Esa-Pekka Salonen as they present another of their Total Immersion events. As well as the usual array of films and talks, three concerts will showcase the work of the Finnish composer who celebrates his 60th birthday in 2018.

Students from the Guildhall School of Music and Drama will give the first concert filled with chamber music including a performance of Dichotomie for solo piano. At 5pm the BBC Singers will sing a selection of Salonen’s choral works: Two Songs from Kalender Röd, Dona Nobis Pacem, Iri da iri, conducted by Baldur Brönnimann. For the evening’s culminative concert Sakari Oramo conducts the BBC SO in a rich survey of his orchestral works including the thrilling Wing on Wing, inspired by the striking architecture of LA’s Disney Hall, and the UK premiere performance of Karawane.

If you can’t make Total Immersion on December 10 then there will be many other opportunities to hear works by Salonen throughout the season: on November 17 the composer will conduct the Guildhall Symphony orchestra in a performance of his LA Variations; the LA Philharmonic, conducted by Gustavo Dudamel, will give the European Premiere of a new commission from the Barbican on May 2; and Ben Goldscheider, will perform Salonen’s Concert étude for solo horn amid the Britten Sinfonia’s programme of choral works on 28 March 2018.